D Day and the Northamptonshire Yeomanry 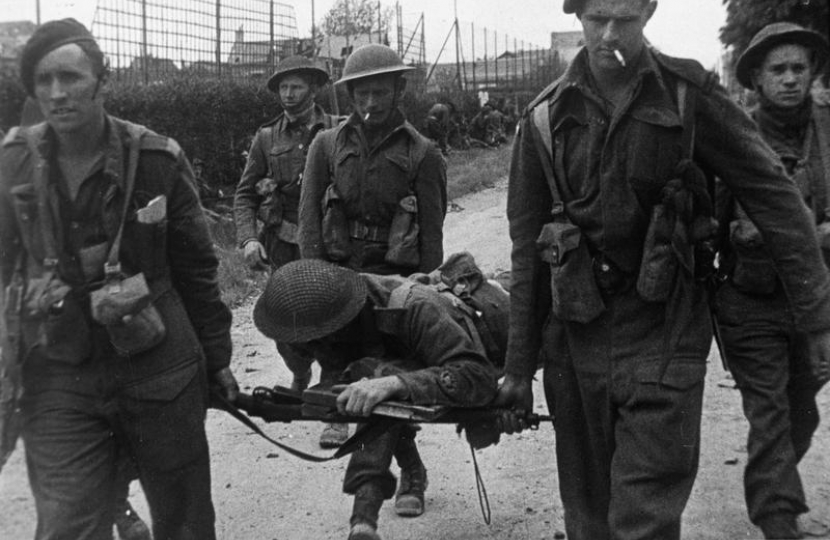 The invasion of Normandy on the 6th June 1944 was the most important military victory of the Western Allies of the Second World War. It was and still is the largest land, sea and air operation in military history and is unlikely to be surpassed. The ensuing establishment of the bridgehead and breakout was as bloody and costly as anything seen in the trenches of Northern France thirty years earlier and it's significance cannot be underestimated.  6939 Allied ships and landing craft embarked 156,000 on the first day from thirteen different allied nations and over 20,000 paratroopers landed behind enemy lines the 6 hours before. Within 5 days 326,547 troops and 104,428 tons of supplies had been landed on the beaches.

Men from Northampton played their part on that day too. Some were paratroopers dropped behind enemy lines the evening before the landing. Others were airmen, infantry, artillery men, tank troopers, engineers, craftsmen and sailors on the great assembled battle fleet at dawn. Northamptonshire fielded three regiments that fought in the Second World War. The Northamptonshire Infantry Regiment was not present during D Day. They were already fighting tough, gruelling battles in the so called underbelly of the Axis power in Sicily and Italy.

The 1st and 2nd Northamptonshire Yeomanry regiments did see action on Normandy although on 15th August, the 2nd Northamptonshire regiment was disbanded and its men subsumed into other units. The 1st regiment landed on Gold Beach on 6th June as part of the 33rd Armoured Brigade, and they saw their first major engagement on 26th June when C Squadron commanded by Major D.G. Bevan and under command of the 6th Battalion Green Howards at La Taille, north of Unchy.

The objective was to attack the enemy line, beat down the enemy, improve their positions and prevent the enemy from reinforcing another sector on the front, thus improving the allies objective of making a breakthrough. It was one of a number of bitter, bloody struggles that was to form the type of fighting over the following 77 days.

C Squadron fought tenaciously and bravely. One account worth noting was the actions of turret gunner, Trouper, (Tpr) C Martyn. That day his tank was hit and out of action. Sergeant  Wright, his tank commander was wounded by machine gun fire. Tpr Martyn instructed his comrade, Corporal Snowdon to get the commander out and back to safety.

Whilst this was happening, Tpr Martyn engaged the enemy with machine-gun fire who were only 100 yards away. Another Trouper, Tpr. Taylor  crawled into the turret and joined Martyn and loaded the gun for him. His tank was hit again. Once the rest of his troop had successfully withdrawn and with most of his ammunition exhausted, Martyn ordered Tpr. Taylor to withdraw and continued to give covering fire with the remainder of his ammunition. Tpr. Martyn then left his tank and together they crawled the 100 yards to the nearest cover, protecting each other with their side arms and after that, they walked the three miles back to rejoin their regiment. 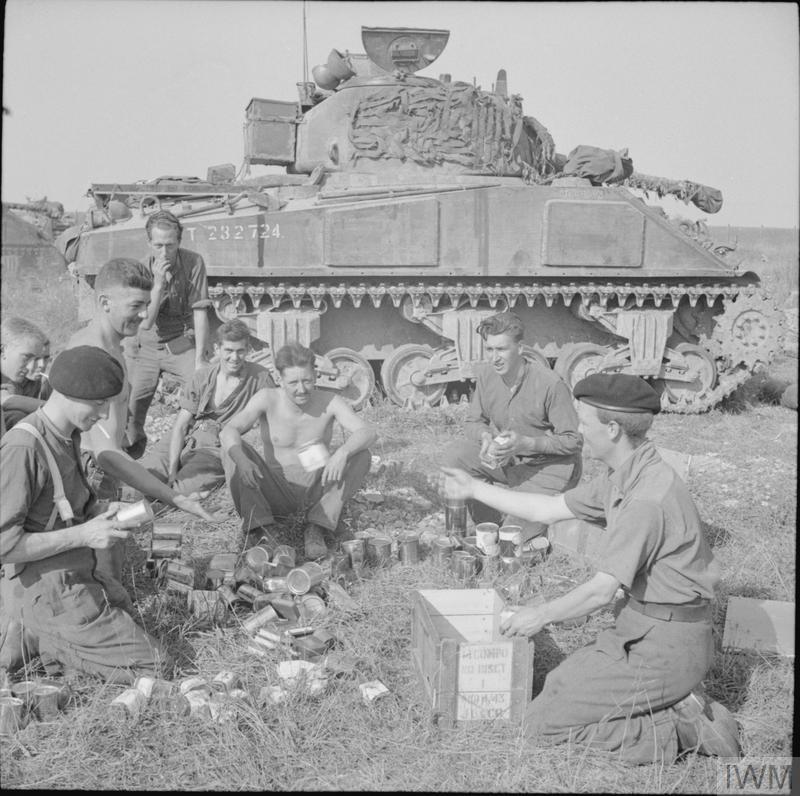 Photo: Crew of a Sherman Tank of the 1st Northamptonshire Yeomanry receiving rations

The regiment went on to fight further bitter and bloody engagements in the Battle of Caen under Operation Goodwood and Operation Totalise, the operation to breakthrough past Caen and begin enveloping the German army around the Falaise gap which secured in the end, the rout of the German army in France.

It was not without cost. From 6th June until the end of the war 1st and 2nd Northammptonshire Yeomanry suffered 447 dead or wounded including Private L Bateman from the Royal Electrical & Mechanical Engineers, (REME). 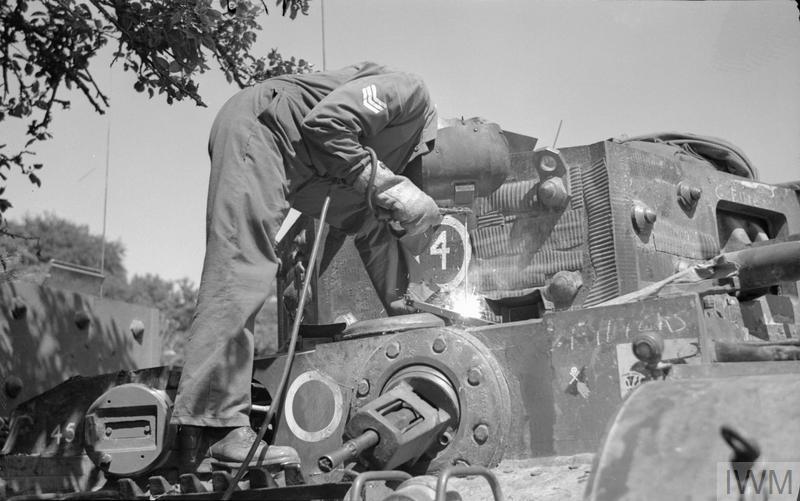 When you go home,

tell them of us and say

For your tomorrow, we gave our today 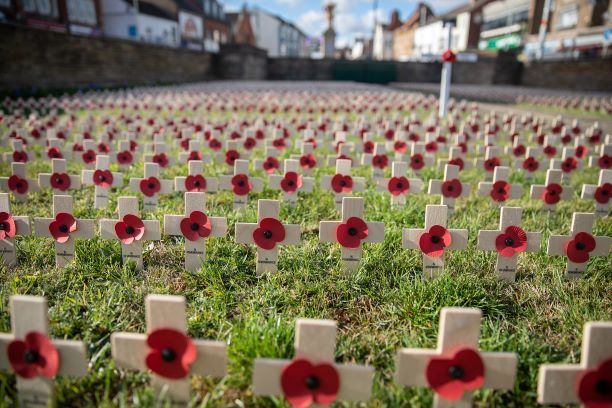 Photo: Poppy crosses in the remembrance garden in Northampton

The events at Normandy on 6th June 1944 had global significance and is in our national memory, but it also has an important local dimension, which has the risk of fading from memory as those who served die of old age. It is vitally important to remember those men from Northampton and the County of Northamptonshire, to honour them, recount their stories and imprint the meaning of those 720 men from the Borough of Northampton in World War 2 who gave their today so that we could have our tomorrow. We need to keep their stories alive and pass them on.

The Northamptonshire Infantry regiment was disbanded in 1964 Their memories and their stories are being kept alive within the 2nd and 3rd Battalions of the Royal Anglian Regiment, our home regiment. 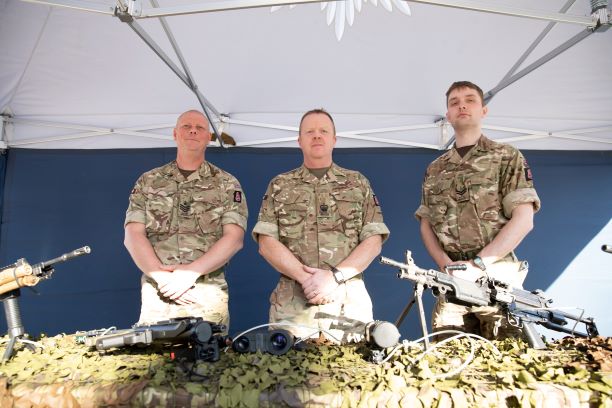 The Northamptonshire Yeomanry regiments have not been so fortunate, but within every armoured regiment there is always a cohort of Craftsmen from the Royal Electrical and Mecanical Engineers who 'keep the punch in the Army's fist!'

I am tremendously proud that 103bn REME is based here in Northampton. I like to think that they provide that living link to the 1st and 2nd Northamptonshire Yeomanry, keeping some of those stories alive for the next generation. 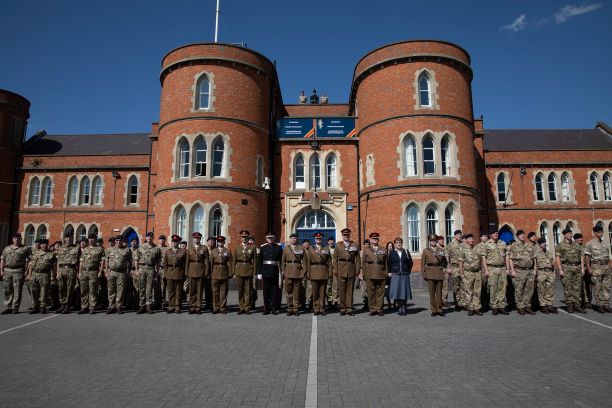 On Friday 23rd May, the Daily Mirror and the Guardian published a story regarding the movements of Dominic Cummings, the Chief Adviser to the Prime Minister, during the lockdown period. The media made several allegations which understandably caused an outcry for his resignation.