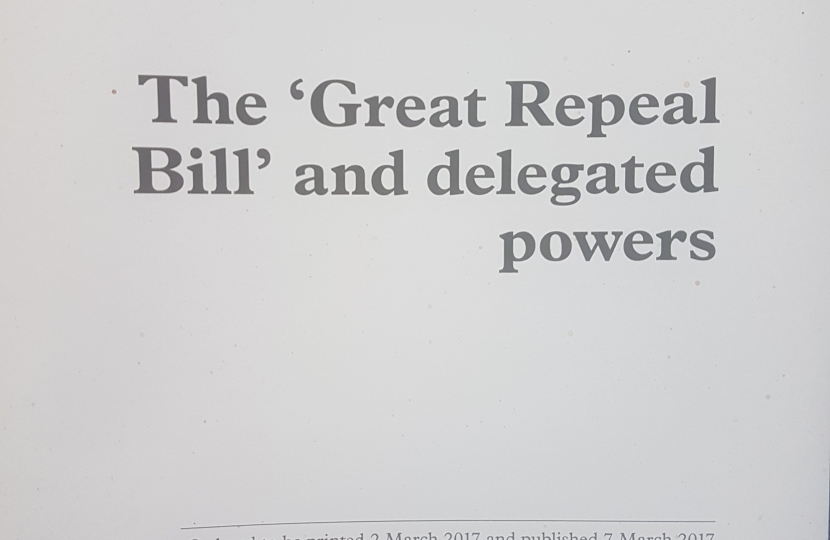 The Repeal Bill has been introduced as a means to protect both businesses and individuals from any disruption during Brexit. I fully support this initiative and I think it is crucial that we use such mechanisms to make the transition as smooth as possible.

This bill will transfer EU law, including the case law of the European Court of Justice, into UK law at the point of the UK's departure from the EU. This will make sure that the UK has a functioning statute book when it leaves the EU and it will provide the maximum amount of certainty, control and continuity.

The Bill will also give ministers in the UK Government and in the devolved administrations a temporary power to make legal corrections to transposed EU legislation. This will be time-limited to two years after exit day. Parliament or the devolved legislatures will also be able to scrutinise any statutory instrument made under this power. I must emphasise that the power could only be used to make corrections to transposed law, for example, by removing references in transposed EU law to the UK as a member state of the EU. The Bill is not a vehicle for major policy changes.

In addition, workers' rights, consumer protection and environmental laws will not change and businesses will benefit from this certainty. Parliament will, of course, be free to keep, amend and repeal laws as it sees fit after this date. There may also be some laws which no longer operate as intended and the bill will provide the power for corrections to be made so that the UK legal system can continue to operate.

The Government also wants to ensure that power is returned as close as possible to communities as laws are returned to the UK. I expect that there will be a significant increase in the decision making powers of the devolved administrations but I want this approach to work coherently for the whole of the UK.]

I can assure you that the UK will leave the EU on 29 March 2019 and that this means leaving the single market and the customs union at that point. The single market and the customs union are the main and essential elements of the EU. To remain in either would mean not really leaving the EU at all. Leaving these will ensure that the referendum result is respected in full and that the UK has more control over the issues you mention.

There will, of course, be an implementation period as we leave the EU. A cliff-edge for business and individuals would not be in anyone's interests. But make no mistake: this will not be of unlimited duration. This would not be good for the UK or the EU.