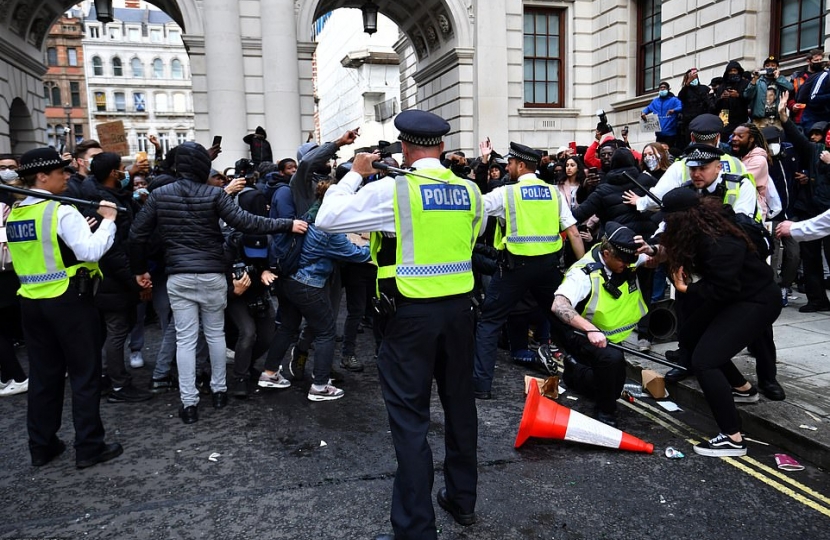 I have received a wide range of views and differing comments from constituents regarding the death of George Floyd, the subsequent riots, other issues that have arisen since and I thought it best to address some of these concerns here on my webpage.

Racism has no place in our society. The outpouring of feelings that we have seen over the past week, empathises the national outcry of feeling that many of us feel at the death of George Floyd. Racism is not an issue on which any of us should be impartial and I think it is important that we use this opportunity to hold open and frank discussions about it.

We were all distressed by the footage in the lead up to his death in police-custody and the police officer involved in the incident has been charged with second-degree murder. I understand there will be a federal review into his death. Whilst the British Government is supportive of these decisions, I must make clear that this will be carried out by the United States Government and their legal representatives, as the death of a US citizen took place on their home soil and is not one that can be influenced by our Government.

I have been in contact with Liz Truss, the Secretary of State for International Trade, regarding the export of tear gas and rubber bullets to America and I have been assured that the Government continues to take its export control responsibilities very seriously. The Minister highlighted the UK operates one of the world’s most robust and transparent export control regimes in the world. Each export licence application is considered on a case-by-case basis against the Consolidated EU and National Arms Export Licensing Criteria. The Consolidated Criteria provide a thorough risk assessment framework.

My understanding is that the Government does not grant an export licence if doing so would be inconsistent with the criteria, and the Secretary of State has confirmed to me that she will keep this under constant review.

Whilst many protests in the UK have been peaceful and respectful, some have degenerated into acts of criminal damage and violence against the police which is simply not acceptable. A number of police officers were injured at the weekend in London, metres from the Palace of Westminster and the spot where Keith Palmer died defending our values against those who want to destroy them. I should add that those who took part in the violent elements of counter demonstrations, of whom the person who behaved so disgracefully towards PC Palmer’s memorial was a case in point, attract my condemnation as well. In my role as Private Parliamentary Secretary to the Home Office, I have been in regular contact with the Home Secretary about this situation who said the following in the Chamber:

“I agree with the many peaceful protestors that racism has absolutely no place in our society. Black lives matter, but police brutality in the United States is no excuse for the violence against our brave police officers at home. So to the quiet law-abiding majority who are appalled by this violence and who have continued to live their lives within the rules, I say: “I hear you.” To the police, who have been subject to the most dreadful abuse, I say: “You have my full backing as you act proportionately, fairly and courageously to maintain law and order.” And to the criminal minority who have subverted this cause with their thuggery, I simply say this: “Your behaviour is shameful and you will face justice.”

As a historian and a democrat, I am disturbed by the imported trend of removing historic statues and criminal damage to others carried out by those who seem more interested in undermining and attacking British values, than combatting racism. Demolishing statues and changing street names are a virtue signalling side show. These acts seek to airbrush our history, and judge past events by today’s morality. Whilst our history is undeniably complex, constructive progress on how to address racism in our society requires dialogue and debate to take place in a constructive manner.

As a former university board member and Council Leader, I have long held the belief that education is the catalyst for change. There are requests for changes to be made to the current historical curriculum, and I know this is something the Department of Education are considering. As I outlined previously, it is important to consider our history in its fullness, the good and the bad. I am in no doubt, though, that there is a lot of good.

Let me reassure you all Members of Parliament reject racial inequality and as your MP I will do what I can to tackle this issue locally within Northampton South and on a national platform.